The updates to the P2PE Standard and supporting program is part of the Council’s mission to evolve security standards and validation programs to support a range of environments, technologies and methodologies for achieving security. Ultimately, the updated PCI Point-to-Point Encryption (P2PE) ® Standard and supporting program will result in more PCI P2PE ® Solutions available to the marketplace. Here we cover key questions on what merchants need to know about P2PE v3.0. 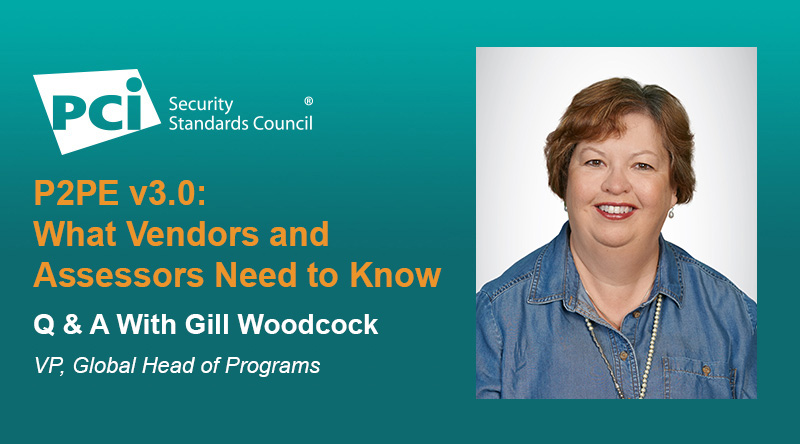 The updates to the P2PE Standard and supporting program are part of the Council’s mission to evolve security standards and validation programs to support a range of environments, technologies and methodologies for achieving security. Ultimately, the updated PCI Point-to-Point Encryption (P2PE)® Standard and supporting program will result in more PCI P2PE®Solutions available to the marketplace. We sit down with PCI SSC Vice President, Global Head of Programs Gill Woodcock to discuss the changes to the program.

While it may be true that nobody can predict the future, when it comes to cybersecurity you can give it a good go. By looking at the security developments that we have witnessed over the past few years, it is perfectly possible to forecast what is likely to happen in the near future.

Plus, with 2020 just around the corner, now is the time to do exactly that. Staying ahead of the game and doing all you can to avoid the risk of a cyber-attack is vital; and what better way is there to do just that than by preparing yourself in advance.

From the rise of 5G to the implementation of AI, here are five cybersecurity predictions for the coming year.

While many people may see advances in technology as a good thing, coupled with that movement has seen a rise in people’s susceptibility to cyber-attacks. As time has moved on, ransomware has become more and more targeted against specific businesses, and that doesn’t look set to change in 2020.

In fact, it looks like it’s going to get worse.

Rather than initiating a cyber-attack at the first available opportunity, attackers are now biding their time, gathering intelligence on their soon-to-be victims. In doing so, this enables them to inflict maximum disruption and scale up their ransom demands accordingly.

A cyber resilience study by the FSB found there are an incredible seven million cyber-crimes against small businesses every year. A large proportion of these attacks came via what’s known as ‘phishing’ – a type of attack used by cybercriminals masquerading as a trusted person or business to steal data. Using a malicious link, these criminals dupe victims into opening a damaging email, instant message or text message.

As time moves forward, this type of attack is going to become more and more difficult to identify, especially when you consider the growing culture of big data. Email is currently the most popularly used channel for these kinds of attack but, over the next year, cybercriminals will likely start using alternative methods, such as social media messaging and gaming platforms, to target their attacks.

Next year looks set to be the year of 5G – a new data network promising higher internet speeds than ever before. While this is very exciting, the implementation of this network will also bring with it an explosion in the numbers of connected devices and sensors across the world – from connected car services to eHealth applications.

As a result, more data will be being collected than ever before which, in turn, will heighten the potential for data theft. In order to protect against this, cybersecurity firms will therefore need to look at designing effective systems capable of minimising the risk.

Most of the pre-existing security solutions available today have been built using human logic. While that may have been fine in the past, as we move forward into an ever-growing technological world, keeping informed about the latest threats is almost impossible manually. Therefore, cybersecurity firms will need to think of new, advanced ways to combat threats – and fast.

Fortunately, this is where artificial intelligence (AI) comes in. Using AI in cyber security is a great way of identifying and responding to threats before they can spread. Utilising this in cyber defence mechanisms can and will need to take centre stage in the coming months, but firms will also need to remain cautious about its potential; cybercriminals will also be able to take advantage of AI, using innovative techniques to identify vulnerabilities and infiltrate networks.

The increasing reliance for public cloud infrastructure only heightens the likelihood of being targeted by cybercriminals. After all, the more exposed a business is, the more at risk it will be.

Therefore, over the next 12 months, many companies will begin looking at their existing data centre and think about creating a hybrid cloud environment for their public and private data. This, in turn, will improve their level of data protection and safeguard them from data loss instances, such as Google’s cloud outage earlier this year.

Today’s interconnected world provides a wealth of opportunities for cybercriminals and cyber security firms alike. While this may make it sound like a bit of a cat and mouse contest, it’s anything but. By being able to predict what might happen in the coming year, cybersecurity providers can stay ahead of the game and use advanced threat intelligence to develop effective counteractive systems.

The post 5 Cybersecurity Predictions For 2020 appeared first on CyberDB.